By: erkkamikkonen
In: Business and finance, Europe, World affairs

An entrepreneur: “it’s not anymore about the economy, but safety”

For almost a decade, Artyom Koleganov, 37, operated his graphics company in his home city of St. Petersburg, Russia. Next month, he might relocate to Portugal. One of the untold costs of Russia’s war in Ukraine has been the rapid rate companies — not just people — are fleeing the country. Eventually, this could accelerate Russia’s economic decline, as companies do not just withdraw their revenues, but also the know-how the nation needs to keep its economy vibrant.

After Russia launched its attack in February, its economy was hit hard. Russia shut down its stock market for a month, the ruble halved its value against the dollar, and, according to the Russian Federal State Statistic Service, the gross domestic product from April to June contracted by 4.1% compared to 2021. However, the situation does not seem as catastrophic as it did a couple of months ago. The International Monetary Fund’s latest World Economic Outlook report upgraded Russia’s economic forecast for 2022, with the country’s economy projected to contract by only 3.4%, instead of July’s forecast of 6%.

Still, Russia’s GDP has not returned to the level it was at before 2014, when leader Vladimir Putin annexed Crimea and initially began the war backing separatists in eastern Ukraine. Since February, the world has witnessed the second phase of Russia’s aggression in Ukraine. The consequences of Russia’s geopolitical aggression in Ukraine can also be seen in the ruble’s value. The Russian currency lost more than half of its value towards the dollar eight years ago and has never returned to the same level.

Koleganov said that he has considered moving his business out of Russia since the initial campaign in Ukraine. He and two friends launched the business, a design studio called Infografika, nine years ago. Since then, the studio has grown to twenty-five permanent employees. Infografika offers web and graphic design services, such as creating web pages based on storytelling and informational design. Early on, the company had some international clients, but now it only serves Russian companies in different spheres like IT, banking, and the industrial sector.

This February felt like déjà vu for Koleganov when the ruble plunged again. Since then, the government has been able to stabilize the currency with harsh measures, like freezing bank accounts denominated in dollars or euros and restricting Russians from converting rubles into dollars. While those measures have prevented a drastic devaluation, they have not made life easier for Koleganov.

“Since February, it’s not anymore about the economy, but also about safety. It seems that after a bit, one can’t travel anymore with the Russian passport, and I fear that we will be trapped inside the country like in the USSR,” Koleganov said, Zooming from Berlin, where he is staying temporarily.

Koleganov escaped Russia for the first time in May. Then, rumors about the government’s intention to shut its borders for male citizens from exiting the country circulated more widely than before. Russia hasn’t officially declared war on Ukraine. It keeps calling its aggression

Koleganov returned to Russia after two months, only to leave again after Putin announced a military draft in September. Born and raised in St. Petersburg — historically referred to as Russia’s window to Europe — Koleganov is a part of the so-called urban creative class. So are many of the other hundreds of thousands of Russians who have left their home country since February. The emigration accelerated after September’s military mobilization and, according to some reports, spurred an additional 700,000 Russians — primarily military-age men — to flee.

The mass exodus has brought on a cascade of economic consequences. Those who left ceased participating in the Russian economy as both consumers and as part of the labor force. Although there is no precise measure to gauge the loss of thousands of working-age men, a draft of 300,000 is equivalent to losing 0.5% of all employed labor, which would reduce Russia’s GDP by 0.5%, according to rough estimation. Emigration can increase this figure several times.

As citizens flee, a growing number of Russian companies are also seeking to move out of Russia. Koleganov said there has been a remarkable change in demand for his company’s services after Russia’s war of aggression in February. Clients not owned by the state have cut their communication budgets. But it is not just the drop in revenue — the war has made it harder to do business even with longtime clients.

“The situation can be mentally really challenging. The war has hamstrung some of our business partners. Many are thinking of their personal future instead of the company’s future. It slows down decision-making.”

After Russia’s invasion of Ukraine, Western nations implemented economic sanctions against Russia more effectively than ever before. The access of seven prominent Russian banks to the SWIFT financial transaction system has been blocked. SWIFT is a messaging system that allows banks from all around the world to send and receive encrypted information, a necessity for modern, digital banking. Moreover, individual companies like Visa and Mastercard have suspended their operations in Russia, and therefore, Russian clients cannot use their cards abroad or make international payments online.

Koleganov thinks Western sanctions against Russia have not had massive direct consequences on Infografika‘s operations. Because all of Infografika‘s clients are Russian companies, the need for foreign transactions is small. However, Koleganov has noticed that payments have begun to arrive in the company’s accounts later than before. He thinks it might be related to the sanctions, which have complicated international money traffic and impacted supply chains. As a result, corporate liquidity across Russia has worsened.

But he is feeling the other block of the Western sanctions – the ban on technology. The computer software company Adobe Inc. — known for Photoshop and other programs for visual editing — has halted all new sales of its products and services in Russia. Another technology giant, Alphabet, Inc., the parent company of Google, ceased providing technical support for its email, calendar, and cloud storage services in the country. These restrictions can be bypassed in order to continue using their software, but this requires the help of intermediates like local retailers. It calls for more work and time, which also leads to more costs for the company.

As a company that provides digital services, Infografika is better positioned to relocate its business outside Russia than an enterprise that relies on physical infrastructure, like a restaurant or factory. Local media has portrayed IT companies, and their employees, as the most willing to leave Russia. According to a poll published in Russian Forbes, more than 30% of Russian IT specialists have left or are planning to leave the country. Russian internal figures show that, at the end of June, the country was short 170,000 IT specialists because of emigration.

Russia has suffered from “brain drain” for decades, but the current flow of emigration aggravates the situation significantly. It is not only money, but also new ideas that Russia continues to lose when hundreds of thousands of citizens — usually the most educated and innovative — abandon their home country. In the long run, the economic growth of a nation hinges on its productive potential, which depends on people, capital, and ideas. Massive, long-term emigration threatens all three.

Reasons to relocate a business vary. Koleganov draws an example of an IT company that left Russia in order to keep its American clients. First, the employees left for Turkey. After some time, they moved to the nation of Georgia, where they continue to do business with the United States. In addition to Georgia, its Caucasus neighbor Armenia has become an attractive destination for the relocation of Russian businesses. Ex-Soviet nations in central Asia like Kazakhstan and Kyrgyzstan have also become popular locations for Russian high-tech experts. These countries do not require a visa for Russians to enter, and the process for corporate registration is more straightforward than in the European Union. The low cost of living makes them attractive, too.

After studying different options, Koleganov said that Portugal seems to be one of the most welcoming countries for Russians to start a business — and new life — in the European Union. However, there is no guarantee that everything will go as planned. Opening a bank account in Portugal, like in any other EU country, seems nearly impossible for Russian citizens. It is not only sanctions or restrictions, but also banks operating cautiously, hoping to avoid possible penalties. Koleganov thinks it is unfair but does not want to blame anyone.

“It’s discrimination by the system but not by people.”

Koleganov’s intention to relocate the business to Portugal does not mean shutting down the company’s operations in Russia entirely. He believes that, ideally, Infografika would continue its work in Russia with local businesses, while the new office in the European Union would concentrate on international clients. However, Koleganov highlights that these enterprises should operate independently, as sanctions make it too difficult for the same company to do business in both Russia and the EU simultaneously.

He believes there will be demand for Infografika‘s services in Russia in the future despite the economic hardship. The other question is, how much are Russian companies willing to pay for such services? Infografika has tried to keep the prices at the same level as before the war. Still, real income has gone down due to inflation.

After Russia began its invasion of Ukraine, the annual inflation rate doubled, reaching 18%. It jumped even though Russia’s central bank more than doubled the interest rate to 20%, in a bid to support financial stability. Since then, the interest rate has been lowered to 6%, and inflation rate eased, hitting 13.7% in September. It is unclear how the massive exodus of Russian citizens and companies will affect inflation. Consumer demand and supply of goods and services are decreasing simultaneously, which can either accelerate the growth of prices or slow it down, according to a report from the Central Bank of Russia.

Either way, Koleganov does not see his future in Russia anymore. His decision to leave is one of hundreds of thousands that will shape the Russian economy in the years to come. 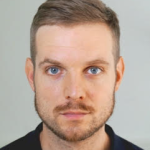