Touted by proponents as a productive method of investing leftover profits, stock buybacks, also called share repurchases, occur when a company repurchases shares of their own stock on the open market. This practice has been a controversial topic in recent years, because by reducing the supply of one’s outstanding shares in the market, buybacks allow executives to boost stock prices without fundamentally altering the profitability of their business.

From 2008-2018, the airline industry spent 96% of its profits on stock buybacks, even as they struggled with pilot shortages. These shortages had one major cause: wages, which actually decreased by 9.5% for the median pilot from 2000 to 2012. Before the coronavirus hit, the industry had only barely begun raising pay for its pilots, but it was too little too late—a generation of would-be pilots had already passed on flight school, meaning the airlines’ problems were not going to end anytime soon. Even as this stark reality stared airlines in the face, their ultimate decision to increase wages did not come easy. When American Airlines announced raises for pilots and flight attendants in 2017, their stock plummeted by 5.2% in one day. “This is frustrating,” Citi analyst Kevin Crissey wrote in a note to clients, “Labor is being paid first again. Shareholders get leftovers.”

There is a growing sense that stock buybacks don’t really come from excess cash. After the SEC’s Rule 10b-18 gave open market share repurchases a “safe harbor” from being judged an illegal tool of market manipulation in 1982, shareholder payments (dividends plus buybacks) have more than doubled as a percentage of total corporate assets, from 1.7% in 1972 to 3.5% in 2017. Common justifications for buybacks, such as purchasing shares at an undervalued price or finding productive uses for leftover cash don’t seem to be the main cause for this rise. Buyback activity—including the proportion funded by debt—has actually increased significantly during market booms where stock prices were high, while shareholder payments were above 100% of net income at S&P 500 companies after the 2018 tax cuts. Share repurchases are clearly more valuable to executives than a last-ditch method of investing surplus capital, with more and more of companies’ earnings going towards buying their own stock.

So, what does this mean for wages? As stock buybacks doubled as a percentage of corporate assets from 1972 to 2017, the wage bill fell steadily, from 21% in 1972 to just 11% of corporate assets in 2017. This doesn’t even parse out the extreme rise in executive wages over the same period, making the reduction even steeper for the average worker. To go past mere coincidence, Lenore Palladino, a Professor of Economics and Public Policy at the University of Massachusetts Amherst, has determined that “a 10% increase in shareholder payments…is associated with a 1.5% decline in logged wages,” when controlling for other factors that may affect wages such as union participation rate, industry concentration (more or less monopolistic), profit margins, productivity, and investment.

These findings reveal a correlation between surging share repurchase activity and sluggish wage growth, but we’re still left wondering whether the relationship is causal and which mechanisms could explain a potential link.

In an ideal world, stock buybacks help increase economic efficiency and better distribute leftover capital by allowing companies who have exhausted all other profitable investment opportunities to invest in themselves. Since this excess capital goes to shareholders and investors, they can then use the influx of funds to support more needy sectors of the economy. However, this tool has become perverted by the United States’ decades-long shift towards shareholder primacy as the guiding theory of corporate governance and increasingly stock-based executive compensation schemes.

Executives have strong motivations to focus on share price first and foremost. First, their performance is often rated by earnings per share (EPS). And there are real consequences when quarterly earnings calls don’t meet their goals. CEO turnover has seen a steady increase from 10% in the 1970s and 80s (implying a tenure around 10 years), to 15.6% from 1992 to 2005 (tenure between 6 and 7 years), all the way up to 17.4% from 1998-2008 (tenure just under 6 years). From 2013 to 2017 alone, the median tenure at S&P 500 companies decreased from 6 to 5 years. CEOs that underperform are increasingly forced out or recommended to step down by boards and investors, with a highly talented field of competitors willing to succeed them.

Beyond the threat of losing their jobs, executives also fixate on share prices due to compensation. On average, the 500 highest-paid executives named in proxy statements of U.S. public companies received 42% of their compensation from stock options and 41% from stock awards in January 2019. This explains why after companies announce buybacks, an unusually large number of senior executives sell their corporate shares during subsequent days. If executives are not maximizing stock prices, they are leaving a large chunk of their earnings on the table.

There is also the, albeit less common, risk of hostile takeovers by large investors and companies if stock prices remain low, another mechanism through which one would lose control of their company. Simply put, if a firm’s stock price is lower, purchasing the majority of their shares is cheaper. It is also easier to justify a takeover because the company is seen as undervalued—if the acquiring company or investor can reinvigorate the acquired firm, they will turn a profit.

Given the aforementioned incentive structure, slip-ups in the vein of a company like American Airlines are to be expected. But how could these incentives systematically drive down wage growth, requiring nearly all companies to participate in the phenomenon?

2) A more productive investment, just not in the way we often think of investment

We now look at investment not only in terms of pure profit and long-term organizational returns, but in terms of CEO and executive well-being.

In a simple economic system, rational agents decide between multiple choices based on the expected value or expected return of a decision. All else equal, if Option 1 has a higher expected return than Option 2, Option 1 is selected. This is where we falter when considering whether stock buybacks would hamper or enhance wage growth; if higher wages would increase a company’s returns, they theoretically should be enacted instead of stock buybacks. Raw profit margins and revenue growth are still the principal baseline on which executives operate, but there is now another type of return which is being considered simultaneously: short-term stock price and executives’ own well-being.

When we add this “executive well-being” premium onto previous decision-making models, it can alter which choices are made. Specifically, it can be the deciding factor in whether increasing profits to fund buybacks—from 1994 to 2013, operating income rose from 5% to 9% of the share of sales in S&P 500 companies—is more valuable to decision-makers than increasing wages. This necessarily reduces wage growth, because the alternatives to increasing wages are now more attractive.

Let’s consider those alternatives. Before share repurchases were commonplace, excess profits were principally used for paying out dividends, further increasing research and development, or increasing one’s cash stockpile. A dividend hike, importantly, is the only other tool that allows executives to reward shareholders directly. However, issuing dividends is not as favorable to “executive wellbeing” as share repurchases. Although announcing higher dividends excites investors and raises share prices, it also locks companies into paying that amount each year. This is why, since the legalization of stock buybacks in 1982, dividend payout ratios have fallen, and repurchases have become the preferred form of initiating a cash payout.

We often think of raising wages as being conducive to productive investment. There is evidence that raising wages increases productivity and decreases turnover rates, two factors that may make it a profitable investment to pay labor more. However, even if bolstering worker compensation would help a company’s long-term growth and profits, we now see that this is weighed against the powerful executive value of share repurchases. Once a decision not to raise wages has been made, this can trickle into other areas of the economy, affecting the decisions made by firms in the same industry. If a subset of businesses are dampening wage growth, and workers then come to expect a certain wage in an industry, then other firms do not have to raise wages as much to compete. This can explain why stock buyback activity is strongly correlated with worker compensation, even though not all companies participate in buybacks to the same extent (many companies do not even have the option since they are private).

Stock Buybacks Aren’t Everything, But They Are Important

“Capitalism as we have known it is dead, and this obsession that we have with maximizing profits for shareholders alone has led to incredible inequality and a planetary emergency.” – Marc Benioff, CEO, Salesforce, at the WEF in Davos

Proponents of stock buybacks urge that, when used right, they are highly beneficial to companies and improve allocative efficiency on a macro scale. However, it seems as though our current executive incentive structure has been obstructing this ideal, with evidence that other areas of business spending such as wages are taking the hit.

It is worth noting that stock buybacks are just one among a host of factors that could be restraining wage growth in the United States, from the decline of union participation to increased market concentration, globalization, moderate minimum wage growth, lower labor force participation rates, and even increased government benefits. They are also only one cog in the decades-long expansion of shareholder primacy, and it is likely a preoccupation with share price would still thrive if buybacks were outlawed (dividends have also increased sharply as a share of GDP starting in the early 80’s).

Regardless, the result of further research and debates on the topic has important implications. If the United States aims to curb its steadily widening income gap, tackling stock buybacks could be a great start; policies addressing the shortcomings of buybacks—such as altering board compositions to influence executive incentives, implementing buyback thresholds, or outlawing the practice entirely—are lower-hanging fruit than, say, reconstructing unions or breaking up large monopolies. Such change could be a powerful step forward as the United States begins embracing “stakeholder capitalism” once again. 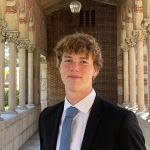 I'm a Senior at USC interested in finding ways to bring out the best aspects of a capitalist economic system while minimizing its shortcomings.